Farming success to be proud of

Farming success to be proud of

Before meeting John Nyuto, he would trek the villages between Mukinyai and Salgaa hawking or selling wall hangings and calendars. We first interacted with him in 2018 during a group compost making process.  To assist the group with preparing a compost, he volunteered to give dry matter in the form of maize stover. Previously he had stacked his stover in a heap, not realising its value in composting and mulching. During the initial stages of training John listened but was not active. His passion and enthusiasm built up with 1:1 visits. New techniques and solutions were discussed and shown by Feeding Futures staff, Naomi and Sam.

As a new farmer, John demonstrated his ambition, resilience and motivation for hard work. He requested Naomi (the agricultural trainer) to help him plan and organise his farm into three portions. With a new plan he put into practice the training on crop diversification and crop rotation.

During the first year of the program, we were able to fully incorporate Foundations for Farming principles during the ‘short rains’ season where John planted tomatoes. The crop yield was excellent and gave him enough capital to purchase inputs (seed). Affording seeds is a big issue in rural areas where, often farmers may be unable to afford seed within a timescale to obtain optimum yield.

The second year of our program John planted maize (in this area due to climate – only 1 crop is harvested each year) so in the short season he planted tomatoes and cabbages.

In the third year John grew potatoes and beans in rotation. He was very excited to see such a bumper harvest. His potato harvest in one season from 0.5 acres surpassed that of 2 acres of maize for the whole year! Having adopted and grown a higher yielding and high demand yellow bean variety, he was able to sell these yellow beans at twice the market value of the local wairimu variety.

These achievements motivate John to keep working hard.  Currently his farm is an “eye attraction” in the locality and he gladly shares information with the community and attributes the success to the partnership with Feeding Futures in the locality.  He is currently sought out for yellow bean seeds, potatoes and potato seeds. He shares information with people who will take action. And is grateful to Feeding Futures for walking with him in his journey from hawking to faming. 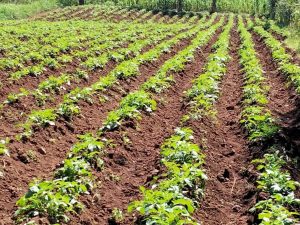 As long as poverty, injustice & inequality persist, none of us can truly rest. It doesn’t take much to change a life. Get in touch today and start making the difference.

This site uses Akismet to reduce spam. Learn how your comment data is processed.